When the lights go up on the Kalk Bay Theatre Stage, it’s both a trip back in time and a rebirth. Their latest show, Noir, is a sexy throwback to the Vaudeville performances of the 1940’s. Irreverent, cheeky, lush and deliciously dark, it’s precisely the type of escapist fantasy that we need in these trying times. 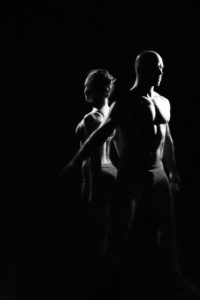 As only the second show put on at the Kalk Bay Theatre’s brand-new home next to the Brass Bell, it’s also a testament to the sheer determination of its owners, Ashley Searle and Vanessa Harris, to triumph over adversity.

For years, the Kalk Bay Theatre had its home in the distinctive stone church on the main road. When South Africa went into hard lockdown, married co-owners Ash and Vanessa hoped that after a few months their venue would be welcoming audiences back. But, as the pandemic dragged on and restrictions remained in place, they were faced with the heart-breaking decision to shut their theatre doors permanently.

But it seems the community weren’t ready to do without them. Ash explains, “We closed. We had no venue. But the Kalk Bay Business Association contacted us and told us there was no way we could not be in Kalk Bay. They said we would leave such a hole.” The association put them in contact with seafront restaurant, The Brass Bell, who had space going spare, and so a new collaboration was born.

What followed was an amazing and humbling wave of generosity. Faced with a completely empty space; friends, family, fellow performers and theatre lovers pitched up and literally helped them build a new theatre. Vanessa says, “The Fugard Theatre donated costumes, wood for our stage and gear. They said that although their theatre might be closing, they still wanted to help us. It was next-level generosity. People donated money and time, expecting nothing in return.” Ash and Vanessa got the opportunity to build the theatre of their dreams from scratch, to create a space that exactly suits the shows they produce. Their symbiotic relationship with the Brass Bell works in favour of both. Theatre patrons can now have a pre-show meal at the restaurant and the theatre’s new seafront location attracts passing foot traffic.

“People who are passing by pop into our rehearsals,” laughs Vanessa.

It’s a great way to grow a fan base and Ash mentions that their audience in the new space is far more diverse. “It’s really eclectic and interesting, which all adds to the vibe.”

They’ve taken the idea of symbiotic relationships a step further, partnering with Blush Play Couture. The adult clothing range has an on-site pop-up shop for the duration of Noir’s run. “It adds that bit of extra spice,” says Vanessa.

And the current show, Noir, is quite the tantsalising spectacle itself. A mix of song, dance, comedy and contortion, this is super sexy theatre for adults. The innuendos come thick and fast, but there’s a joyful lightness woven through it all that is sure to be a hit with audiences. Somehow both nostalgic and fresh, it’s an exuberant romp with its tongue firmly in cheek.

The gorgeous and talented ensemble cast are sure to both entice and entertain.

Noir is running Thursday till Saturday until June. Tickets are R250. I recommend you grab them quickly, the show is sure to be sold out.

Tickets available through Quicket on www.kalkbaytheatre.co.za